This past Sundays stats show just a glimmer in how our MMO's are progressing. Some major anomalies still exist though between what X-Fire says and how Raptr is tracking. Luckily, the combination of the two give us some great insight into how the various games are holding up.
Stay tuned, as I also look at progression of the Rift charts near the end. For now, lets see how our services are ranking the MMO's.
(UPDATE: To help those who do not understand what X-Fire or Raptr is, each logo is a link. Thank you.)

If we really look at this chart, we can clearly see what happened here. As people left Rift (in small amounts, mind you), they started to go back to their old MMO's. But, with such a small drop for Rift, I can only assume that like other BIG MMO's (you know the one), the numbers fluctuate as one leaves, another starts.
Rift is still rocking our charts with over double the number of players for the main MMO's we have been tracking. If I had to take a stab at numbers right now, I would put Rift at about 600 to 800k players (subs?). I do this strictly on how many players we have heard EVE Online has (WIKI notes 300k players back in 2009, and I have seen growth on the X-Fire charts, so that could be closer to 400k now). Now, lets say I used my infamous calc system I have discussed in the PAST, I could see Rift having roughly 930k players (4317 x 215.5). Close to the 1 million mark I keep noting as the "success point" that MMO's need to be considered a viable market. Using that same calc gives EVE 450k (right on my money prediction ...). So, wonder what they REALLY have?

I tell you what... I will save that for a new post later in the week...

Basically, EVE, LOTRO and Aion are all back up this week. Why leave an MMO you have invested so much time into if you were not bored in the first place...right? Rift is definitely for those who like their MMO kinda like the other guys...but, have been fed up with how those other games have been run. I can see, just by looking at this chart, that these 3 games will be around a long time (PS: And to all the Aion haters...sorry, but Aion IS a success story, no matter how much YOU hate it.)

Most of the usual low end MMO's took dips this week. FFXIV had a slight tweak upward though, and is back to the numbers it was showing before Japanaquake 2011. I am happy they at least are keeping this dedicated crowd. But, really; it's still free...why wouldn't they?

We have a new loser this week. DC Universe. I expected this. I also expect more SOE Free to Play action...especially for something that cost them so much...they really need to deliver here. These numbers are not cutting it. Hope the PS3 version is at least keeping people.
****

Lets just report this as we see it. Raptr really has no rhyme or reason...so, I am just gonna deliver their mess...LOL.
As we saw with X-Fire, EVE is back up...yet, LOTRO and Aion fall. Confusing indeed.
Champions is up? Yea. Weird. But, even weirder??? DC Universe cranking so high on these charts. I often wonder if the numbers from the PS3 mix in with these results. When I look at the PS3 results...it says 6 players. LOL.
DDO had a very nasty drop here, and I plan to watch this and see if it continues. X-Fires drop was minor and was to be expected due to nothing event wise going on. Why DDO would drop so far on Raptr is a mystery.
Pretty much drops across the board here. So, X-Fire shows more risers this week, while Raptr shows droppers. Yet, last week X-Fire showed drops, and Raptr showed risers...
So confusing. One can only assume either demographics or region with these services. Wish I could get more data out of them to find out.
****
Now, this week, I want to take a trip down memory lane...and do the Rift charts from Riftideas (riftideas.com). I had used these previously while we watched how servers progressed through time. I decided to get some relative charts from various prime time Sunday's for both the EU and US markets.
Lets see how this went. 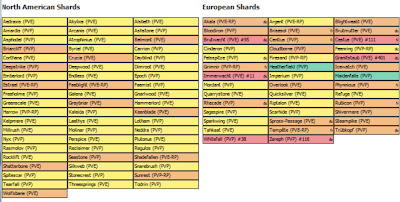 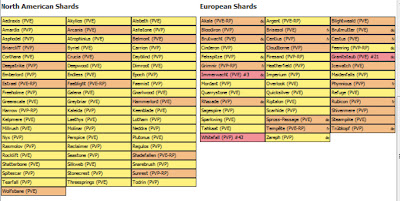 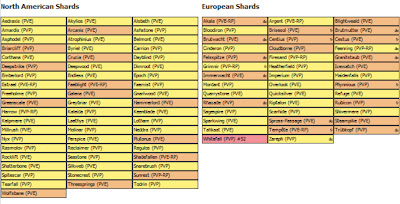 4/10 - Germany 9PM
So, note the progression of the EU servers (Right hand side) as we went through the weeks. The start had quite a few full (queued) servers on 3/27. As time went on, less servers were queued, but then we noted, no low servers. Finally at this week, we have mostly medium and high servers, with just one queued now.

Some comments had been made about tweaking server sizes. But, I also wonder if players moved around and joined alternate servers? Hard to say. The one thing we can see most is that no server is low now...and that is kind of cool.

4/10 - USA 9PM EST
We can note the decline of the servers as time progressed. Quite a few noted as highs went to mediums. But, some swapping took place (I can look and immediately see one medium going to high). Again...new players joining, while old players leave...about a two to one drop (two leave; one enters).

The most disturbing part is how fast the EU servers went from a few lows to mostly lows at this off peak schedule. Alarming changes...but, maybe not unprecedented.

Keeping most of these servers will be the key to how well Rift is doing. If all servers can stay up or at least most with minimal merges, then Rift will be rocking.

****
So, as we come to a close, I just want to throw in the final World of Warcraft chart from X-Fire. Maybe I might check back in on them on a monthly basis, but this final number will be it.


World of Warcraft X-Fire chart April 10th - players  34,755 ( 34,325 ↑)
Once you go crack, it makes you whack and then you go back. So, yes people....players decided that old graphics and gameplay that calls for dedication (et, al; addiction) keeps em coming back. Anecdotally, a guildie in Rift noted to me that their friend REALLY wants to try Rift...but, they have so much time and money invested into WoW, they just can't do it.

And yet, that persons dedication could be all wiped out by just one hack or drive failure. SCARY.

But, as expected. Rift HAS made a dent, but, WoW will hold the crown for a long time to come. When it comes to MMO's...there is WoW...then there are the other guys who combined STILL don't have enough players to outdo WoW (unless your an Asian grinder....and that is a whole other story).

Next contender please...
Posted by Elementalistly at 10:23 AM

Trion gave current players codes to let their friends try Rift for free on the weekends of Apr. 2-3 and Apr. 9-10. So agreed, things haven't settled down. I suspect even with the next Rift world event you will see more "free trials" going out.

Blizzard sent out 7 day free coupons on April 1 to all players that cancelled in the previous 3 months.

I finally pulled the plug on Raptr and uninstalled it on Friday, so that is one less for both Aion and LOTRO. It just doesn't work half the time, which is probably why the numbers for all the games change with no apparent pattern... it is Raptr just not working right.

Found this blog as a result of an MMORPG.com post. Bookmarked! :) If you ever need the latest EVE Online sub numbers, they are often in the Quarterly Economic Reports.

This means that if Rift and EVE are comparable, that Rift has something like 750k subs for its 99 servers.

I think your reasoning seems to be a bit backwards when it comes to the interpretation of the numbers.

I think the theory either would need to change to be something that would explain all numbers, or just stop at no theory can be established due to inconclusive data.

I'll jump on the Eve numbers bandwagon. The latest QEN has a chart that shows the 30 day moving average of accounts at about 350,000 probably near the beginning of March. Since the trend in the graph is moving up, I'd guess the number is probably more in the range or 360,000 - 370,000.