The Witcher - Unique world drags me in

Over this past week I have been pumping my time into The Witcher. An extra long 6 hour session last night for example (it has been ages since I decided to dedicate that amount of time to a game...good thing it was snowy and cold here...hehe) really drove home how much fun I had been missing sticking to MMO's. 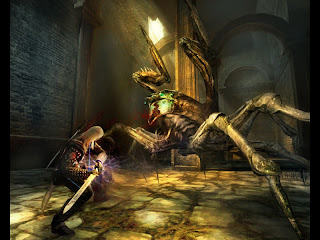 A new Enhanced Edition helped fix some dialogue issues, made loading and saving super fast, and graphics have been updated with some mechanics fixed.

Over the weekend I have progressed heavily and enjoyed a few rather cool story conventions..

First up was an Autopsy.

I did not perform it, but an old friend of mine did (a certain lady friend mind you...).
As the autopsy progressed, at certain points I was given huge dialogue choices of issues I noticed wrong with the body being examined. Depending on my answers, this could change the outcome.
I would have a different suspect based on what direction I went.
What was really fascinating is each of the choices could lead to one of the many suspects of the murder investigation I was doing.

Mind you this is a medieval setting as well.

I will not give a total spoiler, but I will say, something changed this verdict after I made it.

Moving on, after this autopsy, later that night I went back to speak to this lady friend (one thing to note in Witcher is you are not 100% railed...more on that soon) and she was going to throw a party for an old friend of mine. Dandelion. He is mentioned in the short stories I read in the Last Wish (actually several stories), and is a notorious Bard, who is want to have long treatises on life and culture...oh my.
I needed to go get their favorite drinks.
What happens is I GET INVOLVED in the party. I even have to invite a friend ( I decided on an old dwarf friend who I played a game of dice with earlier in the game, who seems to know me...btw, I cannot remember much due to amnesia...AGHH).

As the party is going (clear notices appear on the screen to notify me that "The party continues..."), and as I start to stumble around from being drunk, I learn more about my past adventures with these friends, and I get to ask questions of them.
At one point they get the munchies, and ask me to go down and raid the pantry, due to my "Witchiness..."...bugger!

Stumbling around was a laugh...
During this whole time I realized I had a stupid grin on my face.

Dandelion then sings us a really bad song complete with "Awwoooooo" sounds from "The Werewolf of London" as sung by Warron Zevon (minus the rock tune, and using a lute...) about another adventure involving us, and the dwarf and the lady, and how I am known as the "White Wolf".

But, the whole time during this section of the game (the party lasts about 10 minutes of real time with questioning and stumbling about), is the fact that I am having fun just hanging with old friends. 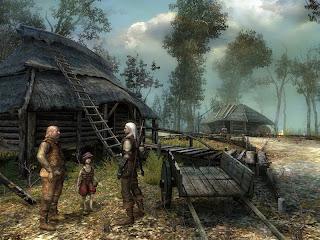 Two things of note (there are many more, for example, the game uses an enhanced version of the Neverwinter Nights engine, and if you look at the images, you surely could not tell, and combat is a realtime affair.) is the fact that the rails are undefined, though present, and this leads to the gray moral area.

As I noted in the autopsy, I could make choices that could change the effect of the game. And even moreso, you have to make TOUGH choices that you may not wish.
As well, every situation has an alternate way out, unless it is the main story, which can be changed somewhat, but not too much.

Basically, you are left to your own devices. There were many times where I had to question myself on where to go next.
Again, like the autopsy. I did not NEED to go back to the lady, but I did later which opened up the party.
Imagine what I would have missed staying on the main path.
As to the morals, at one point, I am forced to decide between the humans and the other races (Elves and Dwarves). I am still upset over this decision. I could have totally blew by this as well, but I felt it had to be rectified. And the fact I gained new information out of it, made the decision (this time) a success.
It is my understanding that this decision will affect certain outcomes later on in the game.

For an indie title, the game has sold quite well. The character is quite engaging (when you walk by someone, if they are too close, you put out your hand to shove them away...or if someone makes a mistake while talking, you correct them), visually the game is well done. Combat is a learning curve, that once you grasp the idiosyncrasies, just works.

Makes me wonder what will happen when I go back to an MMO? Will I be ok with the static paths? The patching issues? The content problems? Or can I look upon them refreshed and enjoy what I have BEEN missing since I first started?

A fascinating road lies ahead. To this note, my decision has been made to make Spellborn (if it releases on time) as my return foray back into MMO's.

I hope it engages!

Cheers for now!
Posted by Elementalistly at 8:31 AM

Email ThisBlogThis!Share to TwitterShare to FacebookShare to Pinterest
Labels: Fantasy, The Witcher

I tried The Witcher earlier this year. I think it was shortly after the point that your at when I started loosing intrest. I'm not sure what happened but I just stopped caring about the story line and felt like I was grinding.

Definately glad your enjoying it though.

Interesting...
Grinding? Moreso than any MMO?...lol

I cannot say I have heard that before. But, I could see the point.

You need to gather ingredients needed for potions for example. This includes killing and gathering from various plants.

But, I am wondering how much of the story you were missing then.

I have tried to break up my time with the gathering and the story line.
I will revisit people from time to time to make sure nothing has changed.

I read the small books I find and buy, and overall I have yet to find a game in quite a while to keep me like this (except for Fable 2 recently).

I think the feeling of "grinding" could be more prevalent in a single player game though if you are use to people being around..

I rather enjoy myself in this setting..

I think that The Witcher was a true sleeper hit. I liked playing through the storyline, and agree that it exemplifies what a developer is capable of doing in an SP game that would be very hard to pull off in an MMORPG (unless you do what FC did in AoC and make a part of the game essentially instanced single player).